So last week I received my proof by UPS man. I know this will sound corny but I didn't open it right away. I put the brown tattered box on my counter and stared at it. I wanted to live in the moment of the excitement that under the package taped flaps, there were two copies of my novel.  Wilson and all the words that created her story were in print, safely tucked with care in the brown cardboard box.  It wasn't torturous by any means, it was inspiring, uplifting, and scary.

You ask why scary? Well, for one, suddenly it is real. It is different talking about your novel to people. But once it is in print, it is solid. Real. An example of your creativity. Once the book is out there, everyone has the opportunity to judge it. Suddenly, the reality of becoming a publish author smacks you right between the eyes.

So once I soaked up the idea that in the sealed box were two copies of my novel I had my family come and watch the opening of the box.  Personal? you bet, but I wasn't going to let the labor of building this book be lost in opening it by myself. My son grabbed the video camera and taped me opening the box. Suddenly, I had a knife in my hand and I was poking it into the gap and dragging it down to cut the tape.

It was like Christmas morning, I yanked and pulled on the box flaps, my heart fluttered and pounded heavy in my chest. I was opening my present; my child like expectations were in a full gallop. Of course unlike the movies, there was a packaging slip (BTW, it had the name of my book and me as the author!) then brown crumpled paper on top. But once I slid the brown paper down, I saw my book in print for the very first time.

It was an amazing, breathtaking, and awakening moment. It was almost surreal. In my hands was my book. I touched it, looked at it, and realized I had accomplished something truly inspiring. I followed my dream, and published the story of Wilson Mooney. A girl who came to my mind with a story to tell.

Now I have the book, yeah I see that I have some work ahead of me, but over all, it has been the most enlightening, invigorating, and life altering experience and I wouldn't trade it in for anything!

My goal is to have Wilson Mooney, Almost Eighteen available at Amazon and Barnes & Noble by the end of July, beginning of August. Then everyone can meet Wilson! 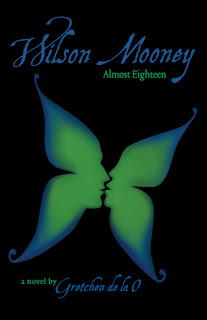 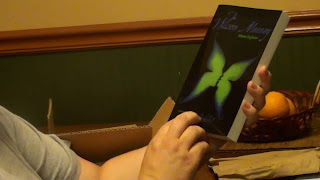 Posted by Written and Ready at 6:44 AM No comments:


My debut novel, Wilson Mooney, Almost Eighteen was inspired by my insatiable crave to ignite, in my readers, memories and feelings of the first time they were spellbound by passionate new love. Tastily portrayed encounters and emotionally charged dialogue rightfully fuel the relationship between the complex; yet inexperienced Wilson and the guy of her dreams. The matrix of this love story will escort you through Wilson’s delicate and intimate journey of new discoveries, a lost family, and her first forbidden love.
Wilson Mooney, Almost Eighteen will be available soon in print and eBook at www.amazon.com and only eBook format at www.barnesandnoble.com.
Wilson Mooney, Almost Eighteen, a novel by Gretchen de la O. Book cover designed by Eunice Ortegón.  Images used in this video production are licensed by DepositPhotos.com and 123rt.com. Music, My Deadly Romance licensed by JewelBeat.com
Posted by Written and Ready at 3:00 PM No comments: